Have you ever wondered why Allah chose this specific sūrah from all the other sūrahs in the Qur’ān? Why are we required to read Sūrah al-Fātihah at least 17 times a day?

Why is it repeated in every single rakʿah? What’s so amazing about this sūrah?

Sūrah al-Fātiḥah was revealed in Makkah. In keeping with the other Makkan sūrahs it focuses on the three fundamental principles:

3. Belief in the Hereafter.

Memorise the following ḥadīth, as it will transform your ṣalāh. 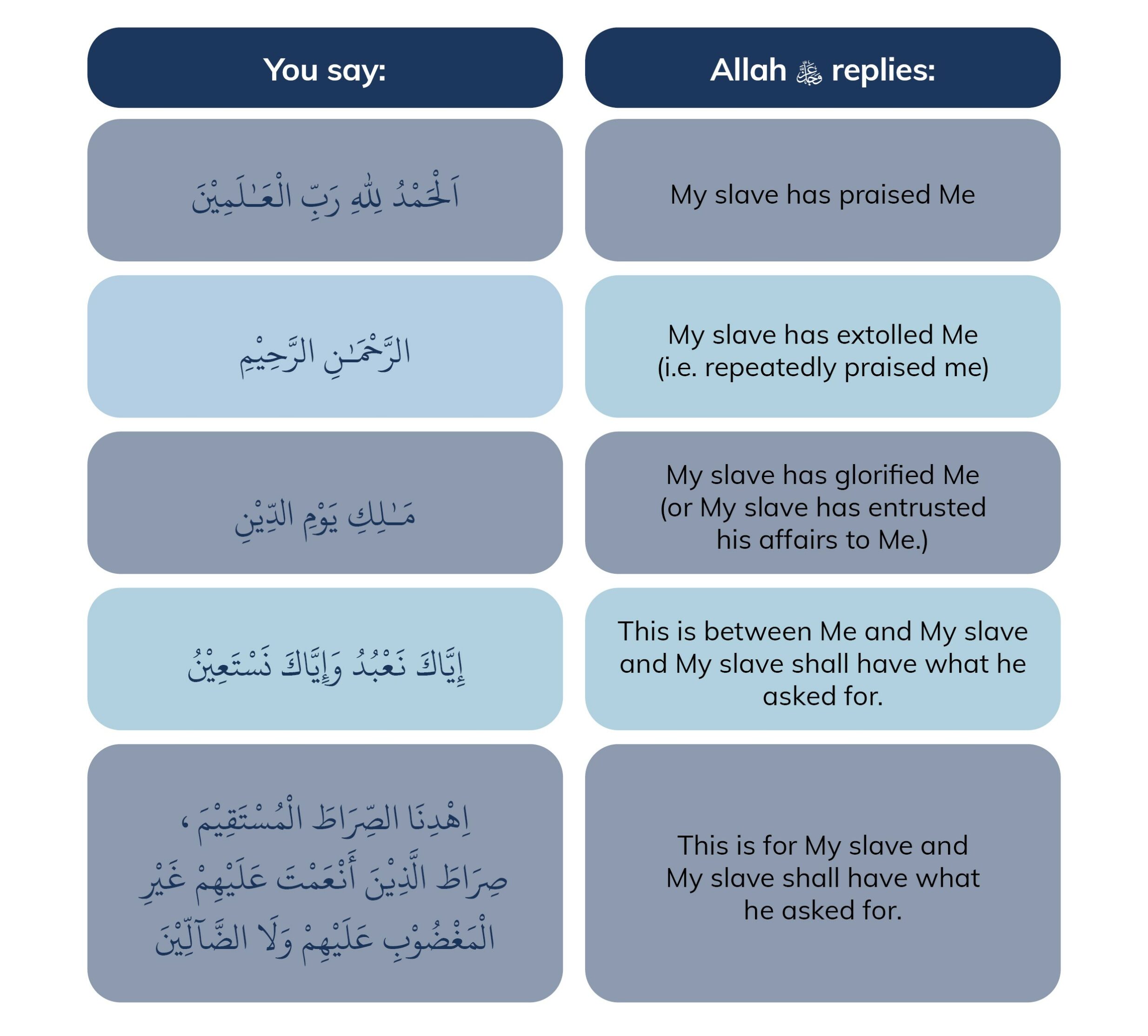 At the end of reading each āyah, pause like the Prophet ﷺ would when reciting al-Fātiḥah. Take a moment to reflect on Allah’s reply to you.

On reading ‘My slave’ in the above hadith, what feeling does this invoke in you?

Think back to when you would visit your parents or grandparents, and they would affectionately say, ‘My child/son/daughter has come.’ How did this phrase make you feel?

Allah (ʿazza wa jall) is above all examples. He is the Most Powerful and the Lord of the worlds. Despite being an unworthy sinful slave of His, He still addresses you here as, ‘My slave.’

Ibn al-Qayyim (raḥimahullāh) said, “How extreme is the joy and happiness of the slave when his Lord says ‘My slave’ three times. By Allah, if the hearts were not clouded by the smoke of the desires and lusts, they would erupt from joy and delight when their Lord, Creator and God says, ‘My slave has praised Me, My slave has extolled me, My slave has glorified Me.’”

Each time you recite Sūrah al-Fātiḥah, do you remember that it is a duʿā’?

Allah (ʿazza wa jall) taught us this perfect duʿā’ because of His endless Mercy. As humans, we continuously make mistakes and commit sins, and are in constant need of guidance. We need this guidance more than food and drink. By guiding us, Allah (ʿazza wa jall) helps us to obey Him and to stop sinning. Thus, no evil will befall us in this world nor the hereafter. For this reason, this sūrah is one of the most comprehensive duʿās.

The sūrah is also a lesson and a reminder on how to make duʿā’. Firstly, you ask Allah (ʿazza wa jall) through His Perfect Names, and, secondly, you express your servitude and need for Him. Sūrah al-Fātiḥah also reminds you of the importance of repetition and persistence when making duʿā’, as you make this duʿā’ at least 17 times every day.

Remember to seal Sūrah al-Fātiḥah with Āmīn. The Messenger of Allah ﷺ said, “When the imām says Āmīn, then say Āmīn; for indeed the one whose Āmīn coincides with the Āmīn of the angels will have his previous sins forgiven” (Bukhārī).

Āmīn means, “O Allah, accept my duʿā.” ʿAlī (raḍiy Allāhu ʿanhu) said, “Āmīn is the seal of the Lord of the worlds. It is with it that His slaves seal their duʿā’.

9: Ruku: A Pillar of Glorification