10 Reasons Why You Should Read the Morning & Evening Adhkar

Why do we remember Allah in the morning and evening specifically? What is the reward of reciting them? How will performing these adhkār transform our lives?

1. Fulfil the command of Allah

Allah instructed the Prophets and the believers to remember Him in the morning and the evening in over 15 āyāt of the Qur’ān. He also instructed the Messenger of Allah ﷺ to keep the company of those who remember Allah during these two times.

2. Join the creation in glorifying Allah

Allah has made this an act of worship not just for humans, but for all of the creation, including the mountains and birds. “We made the mountains join him in tasbīh at sunset and sunrise; and the birds, too, in flocks. All were turning only unto Him.” (Q38:18-19)

The Messenger of Allah ﷺ said: “The sun does not rise except that all of Allah’s creation glorifies Allah with His praises, except for the devils and the foolish humans.” (Ibn al-Sunnī)

In these two times we observe the clear manifestation of Allah’s power as the night changes into the day and the day into the night. These times are therefore befitting for the believer to remember Allah, glorify Him and appreciate His greatness.

4. Reaffirm your Tawḥīd and servitude to Allah

Through these adhkār, you affirm the oneness (tawhīd), uniqueness and absolute perfection of Allah on a daily basis.

Along with acknowledging your weakness and need of Him, you renew your pledge of servitude (‘ubudiyyah) to Him by supplicating and praising Him. The adhkār will inspire you to love Allah, fear Him, have hope in Him, submit to Him and be grateful to Him.

5. Enjoy well-being in this Life & the Next

You will enjoy well-being (‘āfiyah) in your family, health, wealth, religion and in the Hereafter.

The Messenger of Allah ﷺ gave glad tidings of unparalleled reward to those who read the adhkār. The virtues of some of the adhkār include:

7. Acquire blessings in your Day

By starting and ending your day with the remembrance of Allah, you will gain an immense amount of blessings (barakah) in your day.

Four acts bring sustenance:
(1) Standing for the night prayer, (2) An abundance of istighfār before dawn, (3) A commitment to giving charity and (4) Dhikr in the morning and evening. (Ibn al-Qayyim)

When the Messenger of Allah ﷺ faced persecution from the polytheists of Makkah, Allah (subḥānahū wa taʿālā) commanded Him to:

“…Endure with patience what they say; and glorify and praise your Lord before sunrise and before sunset.” (50:39)

The āyah above informs us that in difficult situations, we should arm ourselves with two things: sabr and remembering Allah in the morning and the evening. We have to turn to our Lord, glorifying Him before sunrise and sunset: early with the fresh breath of dawn as life awakens, and late as everything begins to cool down when the sun is about to set.

In these two particular periods we can observe the clear change that takes place in the universe as the night changes into day, and the day changes into night. Human hearts feel in touch with the universe around them, as they witness the manifestation of Allah’s power in the transition of day and night.

The heart is calm and reflective, and this is why these are the optimum times for dhikr as one can appreciate Allah’s greatness better.

Tasbīh is urged on the Messenger ﷺ and the believers at these two times, along with the night worship ‘so that you may attain a state of contentment.’ (20:130)

When we glorify Allah, we have a direct link with Him, and one who maintains such a link is content and reassured. He is reassured because he knows that, with Allah’s help, he is safe and secure. Thus, contentment is the fruit of tasbīh and worship.

9. Journey to Allah in these two times

The Messenger of Allah ﷺ said: “Journey to Allah in the morning, the evening and a part of the night…” (Bukhārī)

These three periods are times of journeying to Allah through performing acts of obedience. These times are mentioned in many verses, including:

“Remember the Name of your Lord in the morning and the evening. And during some parts of the night, prostrate before Him, and glorify Him throughout the long night.” (76:25-26)

In the morning and the evening, one finds both obligatory and optional actions to do. The obligatory actions are praying Fajr and ‘Asr, and these are the best two prayers from the farḍ prayers. These two prayers are performed during ‘the two cool periods’ and whoever preserves these two prayers shall enter Paradise. (Bukhārī)

As for the optional deeds, then it is to remember Allah after Fajr prayer until sunrise and after ‘Asr until sunset. There are numerous verses and aḥādīth which state the virtues of doing this.

The third period is the duljah: journeying in the last part of the night. This alludes to performing deeds at the end of the night which is the time for asking forgiveness.

This refers to the last part of the time of the Descent in which Allah fulfils the needs of those asking and grants forgiveness to those who beg Him for it.

Whoever is unable to join the striving of the lovers in the depth of the night should at least join the sinners pleading forgiveness at the end of the night.

‘I cannot imagine that someone would sleep during the last part of the night!’ (Ṭāwūs raḥimahullāh)

In Paradise, the first two periods (the morning and the evening) will be reserved for the elite of Paradise to see Allah. It is hoped that the one who preserves the two prayers (Fajr and ‘Asr) will be amongst these, more so if one continuously observes the adhkār and other forms of worship until sunrise and sunset.

If the servant adds to that, a journey in the last part of the night, then he has journeyed in all three times. And if he is true and sincere in the pursuit of this, it is hoped that he will achieve the greatest objective:

“Verily the righteous will be in the midst of gardens and rivers, on seats of truth in the presence of an All-Powerful Sovereign.” (54:55)

10. Protect Yourself from all Evil

You will be protected from all forms of evil and harm, including illnesses, anxiety, grief, depression, devils, evil eye and magic.

‘Wear the ‘coat’ of adhkār so it can protect you from the evil of humans and jinn. And cover your souls with istighfār (seeking forgiveness) so it can erase the sins of the night and day.’ (Ibn Kathīr raḥimahullāh)

‘The morning and evening adhkār play the role of a shield; the thicker it is, the more its owner is protected. Rather, its strength can reach to such an extent that the arrow shot at it will bounce back to affect the one who shot it.’ (Ibn al-Qayyim raḥimahullāh) 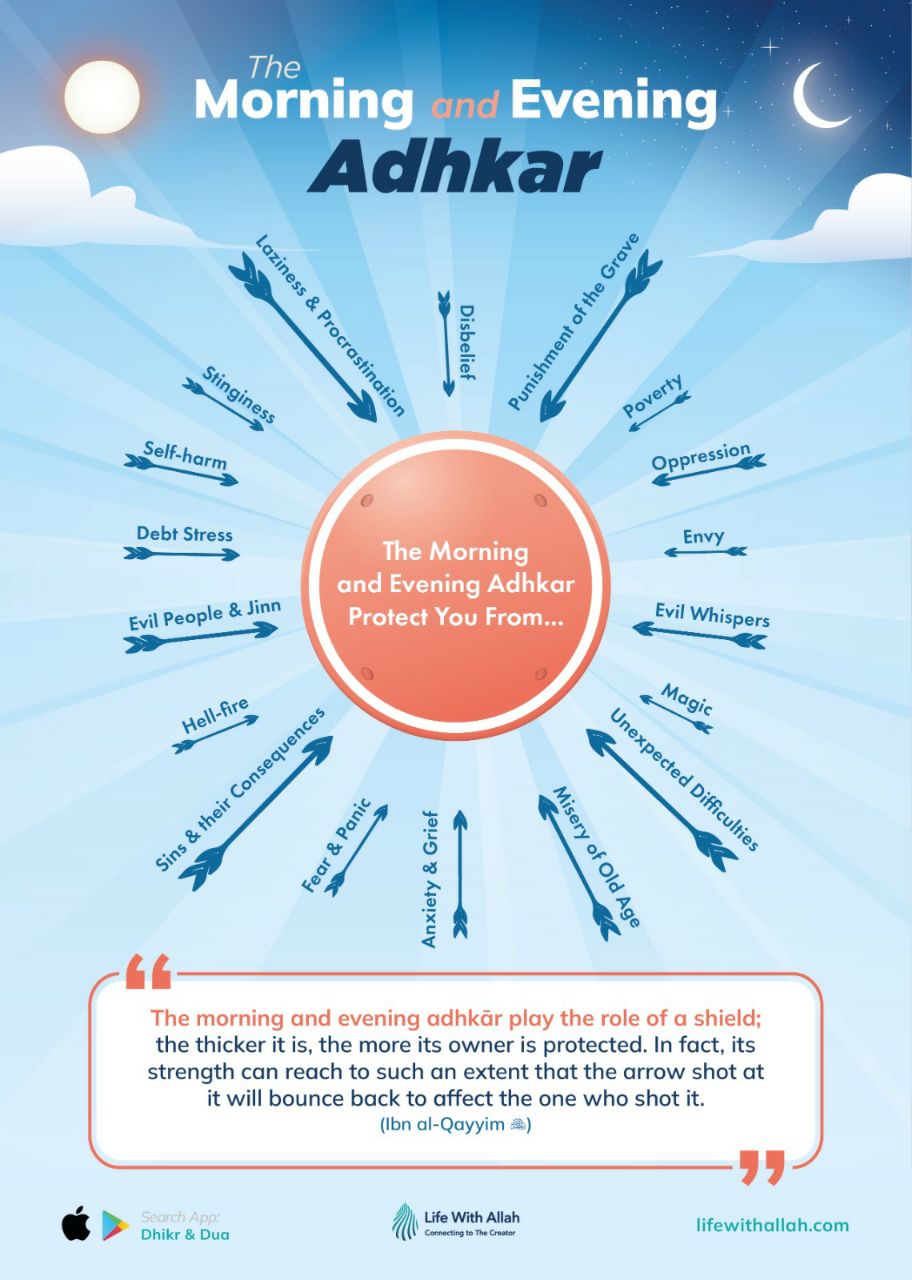 How Much Qur'an Should One Recite?
Next

When Should the Morning & Evening Adhkar be Read?

Page load link
By clicking accept, you agree to the storing of cookies on your device to enhance site navigation and analyze site usage. Accept Reject
Go to Top